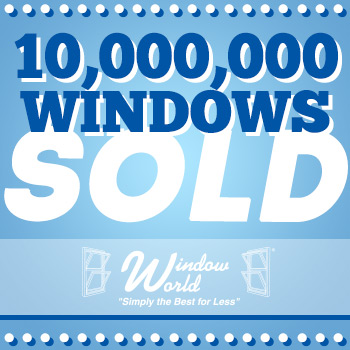 Dana Deem, president of Window World said of the achievement, “Hitting the 10 million window mark is an incredible accomplishment. We’re proud of the products, value and quality that Window World provides, and we are beyond excited about reaching this landmark because it indicates our customers agree.”

10 million windows is an incredible number to fathom. Accounting for the industry-standard window height of 60 inches, 10 million windows laid touching, from bottom to top, equates to 9,470 miles, or 1.2 times the diameter of the earth! Vice President Mark Bumgarner said, “It’s astonishing to me we’ve hit this milestone in so little time. We’re excited to sell our next 10 million windows because we know our sales will have a positive impact in the communities we serve. Not only do we enhance the beauty, value and energy efficiency of our customer’s homes, we also give back to those in need.”

Window World has sold over 1,000,000 windows annually since 2009. Its team attributes strong sales even in weak economic times to a steadfast commitment, enterprise-wide, to fulfilling the Window World promise of providing superior products, professionally installed, at a guaranteed low price.

Window World, headquartered in North Wilkesboro, N.C., is America’s largest replacement window and home remodeling company with more than 200 locally owned and operated offices nationwide. Founded in 1995, the company sells and installs windows, siding, doors and other exterior products. To date, Window World has sold over 10 million windows. Window World is an ENERGY STAR® partner and its window products have earned the Good Housekeeping Seal for eight consecutive years. Additionally, through its charitable foundation Window World Cares®, the Window World family provides funding for St. Jude Children’s Research Hospital®, where it was named New Corporate Partner of the Year in 2010. Since its inception in 2008, the foundation has raised over $5.3 million for St. Jude. Window World, Inc. also supports the Veterans Airlift Command, a non-profit organization that facilitates free air transportation to wounded veterans and their families.

Wait! You Forgot Your Free Estimate!